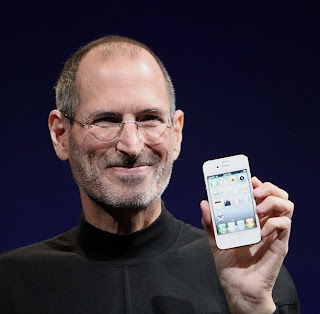 Steven Paul "Steve" Jobs (/ˈdʒɒbz/; February 24, 1955 – October 5, 2011) was an American inventor and businessman widely recognized as a charismatic pioneer of the personal computer era. He was co-founder, chairman, and chief executive officer of Apple Inc. Jobs was co-founder and previously served as chief executive of Pixar Animation Studios; he became a member of the board of directors of the Walt Disney Company in 2006, following the acquisition of Pixar by Disney.

In the late 1970s, Jobs—along with Apple co-founder Steve Wozniak, Mike Markkula and others—designed, developed, and marketed one of the first commercially successful lines of personal computers, the Apple II series. In the early 1980s, Jobs was among the first to see the commercial potential of Xerox PARC's mouse-driven graphical user interface, which led to the creation of the Apple Lisa and, one year later, the Macintosh. After losing a power struggle with the board of directors in 1985, Jobs left Apple and founded NeXT, a computer platform development company specializing in the higher-education and business markets.

In 1986, he acquired the computer graphics division of Lucasfilm Ltd, which was spun off as Pixar Animation Studios.[6] He was credited in Toy Story (1995) as an executive producer. He remained CEO and majority shareholder at 50.1 percent until its acquisition by The Walt Disney Company in 2006,[7] making Jobs Disney's largest individual shareholder at seven percent and a member of Disney's Board of Directors.[8][9] Apple's 1996 buyout of NeXT brought Jobs back to the company he co-founded, and he served as its interim CEO from 1997, then becoming permanent CEO from 2000 onwards, spearheading the advent of the iPod, iPhone and iPad.[10] From 2003, he fought a eight-year battle with cancer,[11] and eventually resigned as CEO in August 2011, while on his third medical leave. He was then elected chairman of Apple's board of directors.

On October 5, 2011, around 3:00 p.m., Jobs died at his home in Palo Alto, California, aged 56, six weeks after resigning as CEO of Apple. A copy of his death certificate indicated respiratory arrest as the immediate cause of death, with "metastatic pancreas neuroendocrine tumor" as the underlying cause. His occupation was listed as "entrepreneur" in the "high tech" business

A STORY FROM INDONESIAN NURSE IN SAUDI ARABIA

November 29, 2021
We are just a group of nurses who are unable to face competition in their own country!   W e decided to reached Saudi Arabia with big dreams . I came here together with friends who unable to survive in the past. I have a story about sadness, care with communities that I lived and some friends survived with salary that I can not explain more. Sad.     Sadness is not the end of our story. We support each other that life must go on. I believe what Allah SWT says in the Qur’an, there is simplicity after trouble. We are a group of nurses, who always write our experiences and trips on social media and share to others. It called a story and our achievements not only be used as motivation but also spirit in the future.   Our fate was not as beautiful, what we have writ ing about our skills are not as good as what we have done. T he house flat where we live is not as beautiful as the house bird's , our dining flat there are no family photos, no relatives after work enjoyi
Posting Komentar
Baca selengkapnya